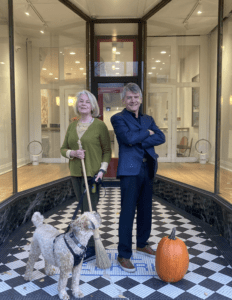 Founded by partners Jill Taylor and Charles Hazell, Taylor Hazell Architects has been in business for 30 years!

Born from a shared desire for adventure and enthusiasm for the potential of architecture to renew community life, Charles and Jill began their business in 1992. Shortly after they finished their internships, with nothing but passion and a plan, they started out hoping luck and timing would be on their side.

Evolution has always been an essential part of THA. They help buildings evolve into new roles, as they have also developed their best practices to reflect customer needs. Just last year, after maintaining a downtown office while living in High Park for nearly thirty years, THA relocated to the Junction.  As Charles told us, the decision wasn’t easy; it felt like the practice was starting over after 30 years.  After carefully considering their future,  the two decided they needed to re-imagine their roles as architects and reconnect to the neighbourhood where they lived. They knew that recovery and positive change from the pandemic would happen locally.  Here in the Junction, they could make the most significant contribution to that change as both architects and business owners. The move was hugely successful, and things are reasonably back to normal with the office up and running. Their 15 staff are busy working away, and clients and consultants come and go like they always have.

THA manages big and small projects with commercial developers and all levels of government. The size of projects varies from artifact restoration to extensive, neighbourhood-defining redevelopments. An example of the latter is the beautiful 6000-student Humber College Lakeshore Campus that uses a formerly abandoned psychiatric facility as its centrepiece. Having worked on city landmarks like Osgoode Hall, the Elgin & Winter Garden Theater, and Casa Loma, you’ll see THA’s work all over Toronto once you know where to look. However, THA’s work is not limited to  Toronto. Located in Halifax Harbour, they also helped restore Sambro Island Lighthouse. Built in 1758, it is the oldest in North America.

Keeping with the philosophy behind their move, THA  participates in local events to keep everyone updated on what is happening at the firm. For example, THA opened their offices in a gorgeous 1919 Art Deco building this spring as part of the Doors Open event. They also showed off the recently completed Clark Center for the Arts in Scarborough and hosted a talk about the exciting architecture of the Junction!

We are happy to have THA in the neighbourhood and know they will bring the same talent and dedication to revitalization they have given to other Toronto areas to the Junction! If you are interested in architecture or neighbourhood redevelopment, you can keep up to date with their projects and events on their website.